Gauge and I are not friends

I have not been able to get gauge with the past THREE projects I've done, which has resulted in me ripping out said projects and starting over at least twice per project.

First, the Toasty Topper Debacle posted about below.

Second, my attempt at the Child's Cotton Hat from Last Minute Knitted Gifts: 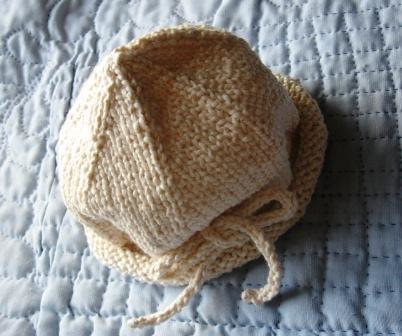 See how it's all pointy? Knitting with the recommended size 7 gave me 4.5 stitches to the inch, while the size 8 gave me 4 stitches but a ridiculous looking fabric. So I split the difference and knit the toddler size at 4.5 stitches to the inch. Other than the point, it actually looks pretty cute, and despite the mysterious extra eyelet, I won't be ashamed to give the hat to its recipient. But it's still frustrating.

I bet some of you are wondering "why isn't she doing gauge swatches and saving herself a lot of frustration?" I'm not doing them because I am trying to channel my Inner Elizabeth Zimmermann, who said that one should just start knitting, particularly if it's a small project, and then check gauge. And for the most part, she's right because it doesn't make sense to swatch for a baby hat, particularly when it's done in the round. But MAN, EZ must have had the patience of a saint if she was willing to do it this way and just keep ripping, ripping, ripping if it didn't work out.

And that brings me to the third project, the sweater vest for The Toddler that I had originally intended to make for a Christmas present. I've ripped it out three times already. Here's a question: other than doing the Dreaded Math, would it be better to knit a larger size in a tighter gauge or loosen up the gauge and knit the size intended, even if one is not nuts about the fabric created? Or what about Option C, chuck the whole thing and knit something else?
Posted by Anna at 12:07 PM