zomg! I turned a heel! 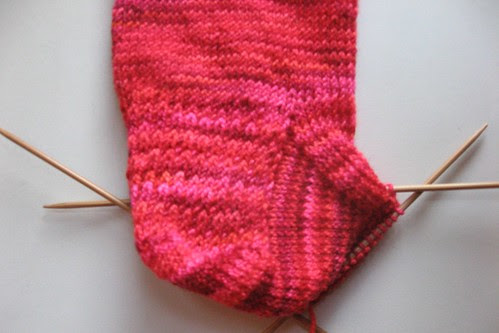 I was forced to take a little break from Anouk (I need to reprint the chart, and the printer is on the third floor, and it wakes the baby, yadda yadda) so I picked up my sock again, which had been languishing as a boring tube for months. I'd started the heel flap at Beth's, and while zipping through my tivo'd Ugly Betty and Gray's Anatomy, I followed the Yarn Harlot's directions from Knitting Rules and turned the heel.


It was amazing. It was magical. People have said not to try to make sense of turning the heel ahead of time, just do what the pattern says and it will turn out. I never believed them because who the heck does a pattern without visualizing what you're supposed to do? But it's true. You just slip and knit and purl and suddenly, a heel!


Can you tell I'm really excited about this? I broke a DPN*, messed up somehow picking up stitches so I have two holes in various parts of the gusset, and discovered that the whole sock is full of ladders. But I've unlocked the mystery! I can do it!

* I've been using Crystal Palace DPNs and after this latest needle-breakage, I've come to the conclusion that long, fine bamboo ones just won't work for me. I need either the Lantern Moon Sock Sticks (ahem, stocking stuffer, ahem) or the set of Knitpicks Harmony DPNs with extra included in case of breakage or loss. (And yes, I realize that the third option is to learn to do it on two circs or Magic Loop, but one new skill at a time, people.) 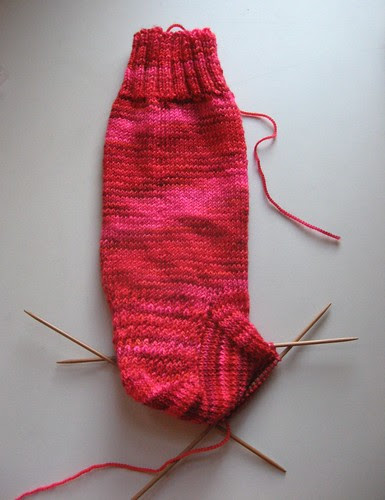 PS. I went on a lovely yarn crawl with Lisa last week, where we hit Yarns Unlimited and Bloomin' Yarns.
Posted by Anna at 11:48 AM 1 comment:

Oh well. So I plowed ahead and knit the front of the largest size with size 7 needles. It looks HUGE. The drape is nice, but the fabric is a tad bit see-through, and I wonder how on earth it's going to hang on a big baby or toddler, and I'm starting to wonder if my BFF Kate Gilbert actually tried a size other than the smallest one on a real baby. Plus, I don't know if it's me or the pattern (I suspect it's me), but the directions as written for the shoulders are backwards. Still, it's a super-cute design. I'll finish it and see how it works; if it doesn't, I'll rip it out and start over again on smaller needles. With any luck, I'll have it finished in time for Melissa to take with her when they visit Sophia, and by then, I hope the Guatamalan government can get its act together and let the adoptions in limbo go forward before the deadline. 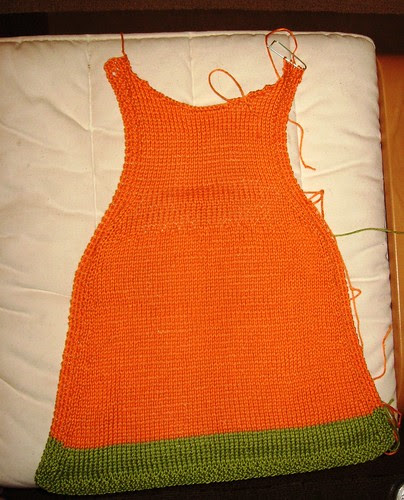 In other news, my sister tried on her Tempting! We still need to get a nice ribbon, but I'm pleased with how it turned out. 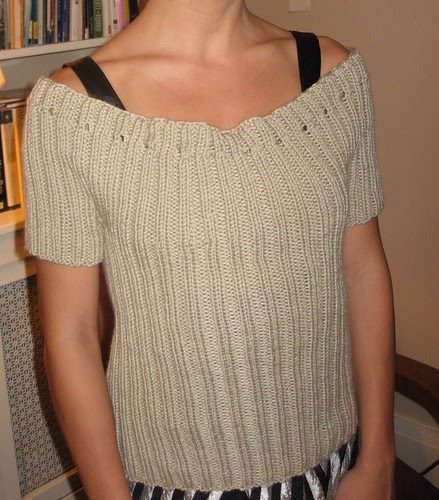 To Knit or Not to Knit

....knit Christmas gifts this year, that is. If I am going to do it, now is the time to decide.

Here's why: I am, for some unknown and unfortunate reason, fixated on making a Clapotis for my mother (yeah, I know that's sooo 2004 and moreover, I vowed never to make one again). I have no Stash suitable for a Clap; I would have to buy more yarn. Hmmm.

In addition, I have horrible visions of me being consumed by Holiday Knitting, ala the Yarn Harlot, and family members opening boxes of half-finished projects and random scraps of yarn.

In other news, I have the back and right front of the Tilted Duster completed. It's a quick knit, but I think I messed up the shoulders. Sigh.
Posted by Anna at 10:25 AM 1 comment: