Just so you all know 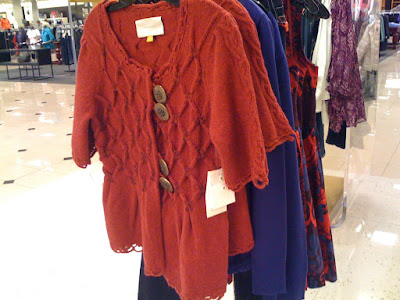 I am now completely obsessed with figuring out how I can knit this sweater from Leifsdottir I saw yesterday at Nordstrom's.
Posted by Anna at 8:47 AM 4 comments:

My friend Bill likes to say that we are all three cheeseburgers away from disaster, meaning that in this day of desk jobs and the internet, we don’t have particularly useful survival skills. And it’s true, after the world ends, my ability to blog and use twitter isn’t going to be worth much. However, with the advent of cold weather, I seem to be drawn to survival stories, for example reading Laura Ingalls Wilder’s The Long Winter for the umpteenth time and watching Defiance, based on a true story of Jewish resistance fighters hiding in the forests of Byelorussia during World War II. And it hit me, as a knitter, I am many more cheeseburgers away from disaster. I could have knit Pa some mittens to wear while he was hauling hay in blizzard-ravaged Dakota Territory. I would have value as a skilled knitter making garments for Russian partisans. And so, as the cold rain falls, I am going to knit a hat, knowing that I’m doing the same thing for pleasure that other women throughout history have had to do out of necessity.
Posted by Anna at 10:24 AM 1 comment: