My mother had this tough old broad of a Manx cat named Feather. Feather was our Cat Matriarch. Every few years, she'd give birth to a litter of kittens (please, no Bob Barker Flames; this was a barn cat in the 1970s). Before she went into labor, she'd disappear, usually under the porch, and then emerge a few days later with the kittens.

That's the way I'm feeling. Nature is telling me to get under the porch.

But there's only so much hiding one can do with a family to take care of. Henry and I have been watching Dancing with the Stars, and I've been sitting on the couch casting on for every sock pattern imaginable while he explains the complexities of Lightning McQueen to me.


Sometimes, though, he's at school, or it's the middle of the night and I can't sleep.

And, thanks to the magic of Kindle, I'm reading Rob Lowe's autobiography. 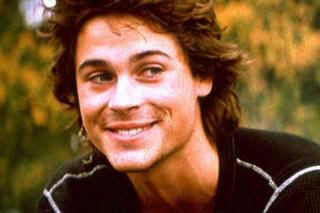 You were such a cutie! I hope you don't go under the porch. We may not be able to get you out.

I highly recommend From Paris With Love on the Netflix.