On May 10, I went to the hospital for my scheduled c-section. Because of the pre-eclampsia, the birthdate had been moved up from May 24. The only cure for pre-eclampsia is to deliver the baby, so it made sense that any potential risk of being born three weeks early -- and 37 weeks gestation is considered "term," not premature -- would be outweighed by eliminating the very serious consequences of full-blown pre-eclampsia.

The surgery went really well. My OB is a family friend who actually delivered my sister 28 years ago. The only hitch in the pre-op period was that I was too swollen for an IV, so the anesthesiologist had to come in and do it. While the spinal block was much scarier than the epidural I'd had with Henry, my blood pressure was low enough that I didn't need the magnesium drip I'd also had at Henry's birth. (The mag drip is to keep a pre-eclamptic patient from seizing and going into organ failure; it makes you nauseated, sleepy, and completely out of it, and I was glad to avoid it this time and be more present at the birth.)

Michael Francis was born at 2:21 PM. He weighed 6 pounds, 12 ounces, and was 19 inches long. He started crying right away and my thought was "Well, there's nothing wrong with his lungs." 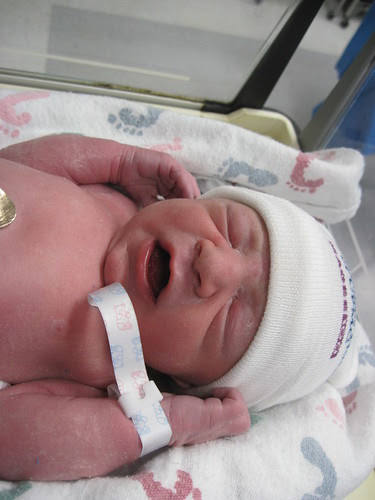 But there was something wrong with his lungs. When we got back to the PACU, the nurses remarked that the baby was wheezing and grunting as I tried to get him to latch on to initiate breastfeeding. I didn't think anything of it, as I thought babies wheezed and grunted. I made the nurse tell me what was happening. He was making those noises because he couldn't get air into his lungs quickly enough. He couldn't latch on because it interfered with breathing. After two visits from a resident from the NICU, they made the decision to take him to the NICU for evaluation.

At the same time, I started to bleed heavily, so what happened after that is still foggy. I'm so glad that before they took him to the NICU, we all got to hold him and be with him. 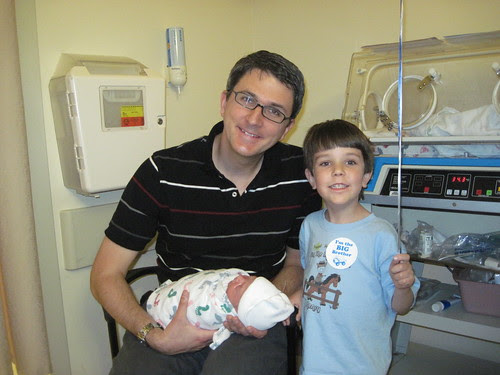 Later than evening, the nurses got me in a wheelchair and we went down to the NICU. Michael was in triage, on a ventilator, which was very hard to see. They treated him with surfactant, and took a culture and x-ray to check for pneumonia. I won't go into all the details -- I'm not sure that I'm ready to talk about the details -- but in summary, he did have pneumonia and spent seven days in the NICU on antibiotics.

The NICU is a scary place, but it's full of amazing nurses who I'm pretty sure are angels in disguise. If the Rapture HAD happened yesterday, I know they would have been taken instantly.  While Michael had some setbacks (for example, we walked in on Thursday to find he was put on a feeding tube when he'd been taking a bottle just fine the night before), he improved almost every day, and I knew that we were much, much better off than pretty much every other family in that NICU. Slowly, I got better as well, after a frightening incident on Wednesday where I almost fainted in the NICU as a result of my heavy blood loss.

We brought Michael home a week later. Because this is a knitting blog, I have to show you that he came home in not the romper I'd knit (too big!) but with the sock yarn scrap blanket I made. 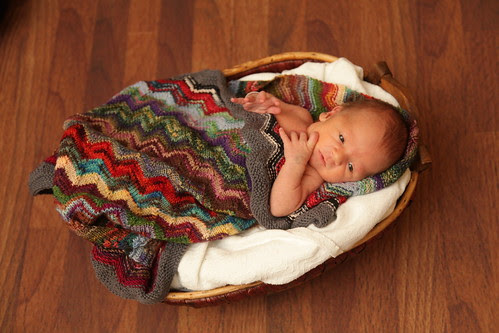 He is beautiful! Congratulations! You are right about NICU nurses. They are very, very special and wonderful people. By the end of Levi's stay, it felt like leaving family behind. I wanted to bring them all home with us. I'm glad that you are all doing well now!

Congratulations! He is beautiful.

What a darling! Love his blankie, too. Wonderful that you are all OK.

I'm so glad you are okay, and Michael too! And his coming home picture is ADORABLE!

I'm glad to know that you're all home together now. He looks so darling in that basket all wrapped up in his blanket!

He is adorable. Congratulations! So glad that you are okay, and Baby Michael is okay. And the baby blanket is perfect. So much love in these photos!

Congratulations! So sad that he had to go through the NICU, but thank goodness he is better.

Glad I got to meet him! Now when can I hold the little rascal?