Happiness is an armload of Socks that Rock yarn. 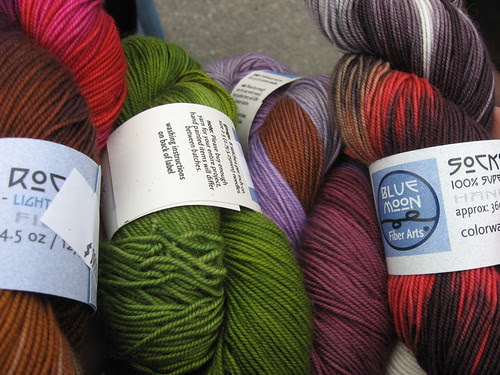 Standing in line at The Fold was not how I planned to spend MDSW, but I finally understand what all that chatter about “yarn fumes” is about, because I was high on something when I got swept into that line. How could anyone resist the colors, the smooshiness of it all?

It’s a testament to the general good hearted nature of knitters that the line to pay for the STR at the fold went out of the barn and stretched outside down past the next barn and no one seemed to be just grabbing an armful of sock yarn and making a break for it. Instead, everyone got her yarn in an orderly fashion, took it outside, and stood patiently in line. Some people knit, other people had their arms too full of sock yarn to knit, but everybody was in good cheer and chatted pleasantly with their neighbors in line. It was a surprisingly lovely experience.

As for the rest of the haul: 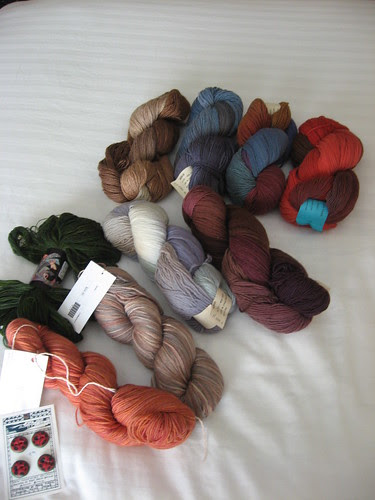 From Tess, well, a lot, two skeins of sock yarn, two skeins of laceweight merino (dude, I don’t even knit lace), and two absolutely divine skeins of Silk and Ivory, a gorgeous silk and merino blend.

From Just Our Yarns, some green cashmere laceweight (again, dude, I don’t know how to knit lace).

From Cloverhill, a bunch of indie dyer sock yarn

And from the Barefoot Spinner, a stunning skein of handspun, hand dyed sock yarn (and if anyone has a tag from her yarn, please weigh in on the comments, as I don’t know how much yardage I have).

It was a great time, if not a bit overwhelming. Ideally, I think the perfect day would have been to have Saturday’s selection with Sunday’s crowds, as Saturday was a mob scene, but things looked pretty picked over the next day. But in short, A++++ would attend festival again!!!

amen, sista. and thanks for the str p0rn. yum-o.

i'm turning the heel on sock 1 of the str mediumweight monsoon. it's doing a strange but uniform striping thing and it is oh so squooshy. love.

Looks like some nice acquisitions. I think the fact that you picked up so much laceweight is your subconscious' way of telling you that you need to start knitting lace!

are those some ladybug buttons I spy in the second picture? I have gone from hating those tiny creatures to having a bit of an obsession over them. My grandma called Eleni a little lady bug and it was all over.
Sounds like you had a fun time, and got some great fiber! Happy Knitting!