So we’ve been coming out to Jackson Hole, Wyoming for the Grand Teton Summer Music Festival almost every year since our honeymoon (by the way, we’re celebrating five years of marriage on Friday!).  Jackson is located in the northwestern corner of Wyoming, south of the Yellowstone Plateau, and surrounded by the Grand Teton National Park and several National Forests. It’s kind of hard to get to. The first year we flew to Denver and drove up, ending up going over non-existent roads in the dark. The second year we flew (did you know that the Jackson Airport is the only commercial airport to operate in a national park?) with newborn Henry. The third year, I flew with barely a toddler Henry while my husband drove our car. Then we skipped a year, and last year, we all drove, breaking the trip with a visit with family in Oklahoma.

This year, my husband declared we were going to make the trip in three days, not four, which would require ten hours of driving per day. Okay. I can get a lot of knitting done. The Preschooler is generally pretty agreeable in the car, as long as he has his dvd player. We should have been fine.

That is, until we blew out a tire somewhere in Iowa. Fifty miles east of Omaha, we heard a dreadful noise. Thankfully, my husband was able to pull halfway up an exit ramp before the tire completely gave way. It was still a dangerous situation as he struggled to put on the spare tire while avoiding exiting trucks, but it beat the alternative. I was able to walk Henry up to a truck stop – because of course at the moment of crisis, he pipes up “I have to go potty!” – while my husband worked on the tire. He put the spare on…and then the car wouldn’t start. The car repair place by the truck stop did not have the tire we needed and moreover, didn’t have time to come out and jump our car.  Mercifully, the car insurance has roadside assistance and within half an hour, someone had come to jump the car and locate a tire.

Three hours and a pretty scary tire shop later, we were back on the road.  I feel lucky; it could have been so much worse, but we still had to drive for another six hours to make our deadline. We made it through severe lightning storms in the plains of Nebraska before we reached our hotel in Ogallala at midnight. Henry slept a little in the car but woke up crying and distressed to still be in his car seat. My husband was bummed out that he didn’t get his Runza, apparently a staple of his Nebraska childhood.

And to top it all off – since this is a knitting blog after all – this year is the year that I get carsick if I knit. Carsick! I completed Kelli’s Sunday Swing Socks and listlessly did a few rounds on a plain sock, but this was not to be the year I speed through projects as we drive through the Midwest. Co-workers, I cede the Summer of Socks and Lace to you. 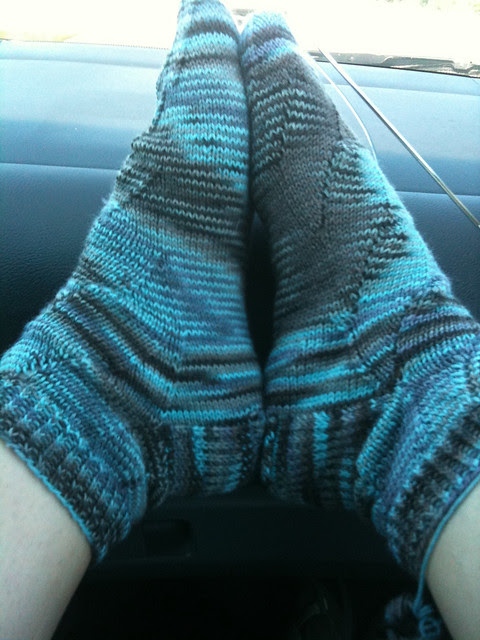 If I don't want to get carsick, I can't do anything in the car but ride. All that knitting time lost...

Oh, noes! Not carsick!! That is just a darn shame. :( I still think you'll be the winnah.

Missing out on a Runza is a heartbreaking thing! I hope he gets another chance. The pics of your family in WY are great.