In Praise of the Second Trimester...or How I Continue To *%_#_ Up My Knitting

So I've rediscovered that the first trimester of pregnancy, at least this pregnancy, is not conducive to knitting. It wasn't that the smell of wool or dye made me sick, or the motion of the knitting needles made me dizzy; it was just that the act of knitting, of picking up needles, moving the yarn around the needles, having to think about what I was doing, was absolutely exhausting. I would knit a row or two and put my needles down and sigh resignedly, like I was Beth on her deathbed in Little Women.

The second trimester is proving to be better -- even though this morning I find myself lurching about the house looking for something to eat like a zombie on The Walking Dead, even though I've already eaten a bowl of cereal, my Thai leftovers, and my son's Thai leftovers. Anyway, I felt so much better that I embarked on the Crazy Town that is Christmas Knitting. (If you haven't seen the video linked, please do so. It is funny because it is true.)

However, I am going to rue the day I made the decision to go to Crazy Town. For example, I intended to make these Fuzzy Feet for my father, and I thought I cleverly adapted the pattern to fit his wide, men's size 10.5 feet. See, here they are unfelted: 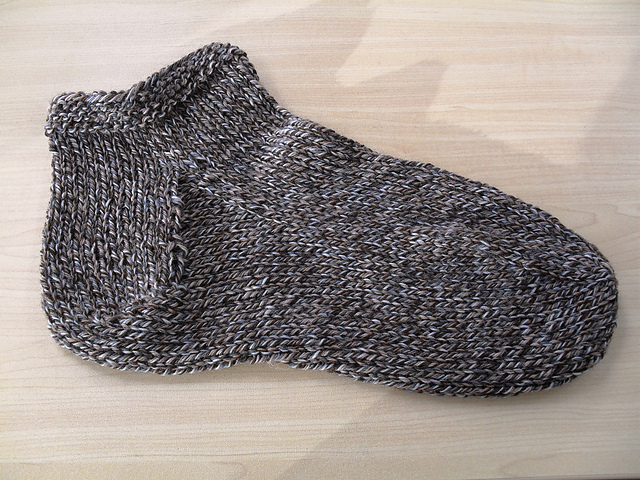 And here they are, felted. I don't have a picture showing the scale, but let's just say that my four-year-old has a new pair of slippers. Remember kids: felting is an art and not a science. It's probably not a good idea to felt on a deadline, either.
On a brighter note, at least the handknits from last year are being used and enjoyed, and even accessorized. Those sunglasses are excellent.

I love a good Henry photo.